I have two pets. I chose to buy them and give them a home and whatever happens, I will stick to that commitment. If something happened and I couldn’t do that, I would do everything in my power to ensure that they got loving homes as good as they’ve had here or better.

It was with disgust and sadness that I watched an RSPCA programme this week. Two stories were particularly harrowing. In one, some dogs were found in a disgusting state in a bedroom. They were Shih Tzus. A Shih Tzu’s coat grows as they are non-moulting. These dogs had been kept in squalid conditions and not to put too fine a point on it, their hair had grown as they lay in their own excrement over several weeks or months. When the RSPCA Officers found them, they looked like bundles of matted hair and they thought that they were dead. They were alive, however, and the shocked Officers told the story of how they had been rescued, taken to the vet and they’d had to be anaesthetised to remove the matted coats. Their clipped fur filled huge plastic bags and weighed so much that the vet was amazed they had survived. They were lucky. They were rehomed with a loving owner and got all the things they’d missed – good food, walks, attention, play. You can see the news story here http://www.itv.com/news/tyne-tees/2012-11-01/dogs-rescued-after-months-of-neglect/

Today there was a story of a cat owner. There were seven cats in the house – some of them kittens – and it was clear that they had cat flu. The owner pleaded poverty, as she smoked her cigarette, answered her mobile phone and had a conversation about buying perfume and the latest CD from her favourite artist. She was given a warning about getting the cats treatment but said she couldn’t afford the taxi fare to take them to the vet’s. I was so angry with her. Talk about getting your priorities all wrong.

Getting an animal is just too easy. You don’t need money. You don’t need a licence. You don’t need to sign a contract to guarantee that you will look after it properly. The resulting cruelty and neglect has to be funded from somewhere. It is not cheap to take on an animal. My elderly cat now costs me £36.99 a month to insure and about £15 a month to feed. If I go away, I have to pay a cattery to care for him in my absence. I buy flea and worm treatments monthly for him and ensure that he is kept warm, clean and safe. There are times when he annoys me (cat puke down the front of the washer is not good) but also times when he snuggles up to me when I’m feeling down as if he knows I need a hug. When I bought him, I knew he would require a lot from me and accepted my responsibilities.

If only others took the step with knowledge and understanding before going ahead. 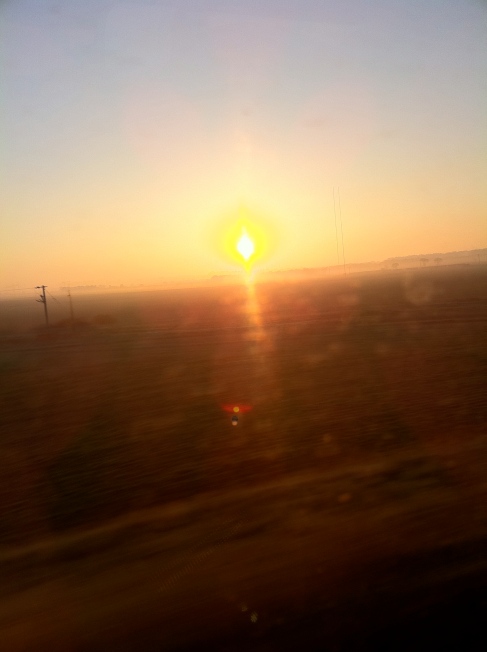 A photo from the train one early morning

A couple of years ago I had a job which meant a lot of travelling. The organisation I worked for had to be mindful of carbon footprint and so the journey from the north east to London for meetings had to be done by train. Consequently, I spent quite some time:

To book a ticket to London and to arrive by 9:30 cost around £300 each time. To fly from Newcastle and use the Stansted Express was about one third of the price. However, the company didn’t want us to fly because of their carbon footprint. Sometimes a First Class ticket would be cheaper. But we couldn’t use First Class as the company had to be accountable to the public and it didn’t look good sending employees First Class.

London was pretty straightforward. Manchester, Liverpool and Birmingham not quite so. And trips to Warwick University were even more complicated. I would have preferred to drive. I like driving. I like the fact that you aren’t carrying heavy bags up and down stairs, finding safe storage on the train and that you can stop for a coffee or a wee whenever you like. But…….carbon footprint and Health and Safety said ‘NO!’.

I became an expert at not having a wee for hours on end. Have you ever used a train toilet?? I also learned what it was like to have a meeting finish early and get an earlier train where I had no reserved seat. I once spent 3 hours squeezed in a corridor with a man’s sweaty armpit in my face.

Then there were cancellations and delays. Leaves on the line. The wrong sort of snow. Flooding. Signal failure. Cable theft. The list of whinges goes on and on.

I miss those days. I loved that job. I loved my colleagues. But I don’t miss the trains at all.